aaaaaAAAAAAA
I generated a pantheon using the madness found here, with a bit of this and that.
Here's the insane result! Making it was fun! 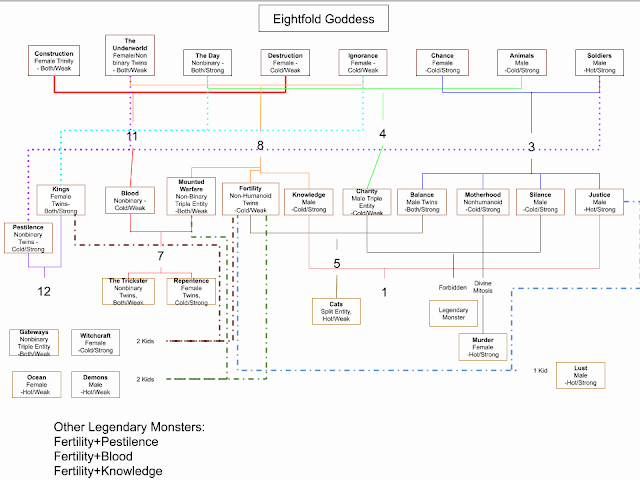 I gave them names! And I've been playing lots of Cult Simulator so that inspired a lot of these.
Eightfold Goddess - The Creator and Great Weaver of All. She who granted form to The Eight.

The First Wards: Also called Mud-To-Bricks. Individually, they are called Volcana the Hammer, Hestia the Forge, and Brigid the Smith
The Gates of Death: Each Door is it's own Aspect: Keidara of the Lock and Roshan the Unbroken
Dagr, The Noon-Blaze: Eye of the Weaver, Hour of Life and Death
Noxia, The Unceasing Wind: She-Of-Calamities
Lethe, The UnMind: The Cave-dweller, The Blank Slate

Kleros, The Blindfolded Archer: Who's Arrows Fall Where They Will
Settu, The Stray: The Darkened Claw, Dances-In-Shade

Euphos, The Guardian: The Unbroken Shield, The Great Protector
So breaking out the relationship dice rolls from here a bit more also gives some lore inspiration.
So to wrap up this blog post, I'll summarize the second generation god names and maybe cover their relationships in a future post.
Xashur, Warrior of Decay: Sword of Plague
Gwynvold and Nymenche, "The Crown and Sceptre"
Ickorus, Blood of the Gods
Kalvores, The Riders
Ferralocke, The Conception and Birth
Sagaheim, The Book-Keeper
Za-Ket, The Three Faces of Giving
Nilarm and Baskarr, "The Flood and Blossom"
Ursck - "The Mother's Rage"
"______" - (Nameless god of Silence)
Rag-Kios - "Justice of the Gods"
Posted by Ambnz at 3:27 PM